Ann and myself have been thinking a lot about the recent Brussels incidents over the last few days. It is very sad for everyone, especially the families of those killed and injured. It is extremely sad that a very small number of disturbed human beings have caused such suffering to many other innocent humans. We have been thinking about the friends and families of the victims. How do you to come to terms with such an event. We have been thinking about how other people usually react to this type of event, especially politicians and the mainstream media. Perhaps we all need to think about what our individual human responses could be to an event like this. Anger? Fear? Something else?

The usual reaction from most people is a mixture of anger and fear. This is a normal reaction because we feel threatened. The level of threat we feel is magnified by the reaction of others. Many politicians in France and the U.K. have said we must increase our security and step up the intensity of the ‘War on Terror’. We need to put more resources into fighting the people who are to blame. They are at the root of this. Drop more bombs on terrorists and potential terrorists in other countries. There will of course be some unfortunate ‘collateral damage’ of more innocent humans. This is an inevitable consequence of a war that we need to win at any cost. We need to put more resources into protecting our borders and we need more surveillance of everyone. We must be vigilant and spy on each other. Extreme events seem to be producing an extreme response. Is there another response which may reduce this threat? I feel that although I don’t have an answer, a very wise monk living in France may have an idea.

One of the benefits of our wonderful life here in France is the time we have to spend thinking and reading. I have read a couple of very good books by Thich Nhat Hanh. 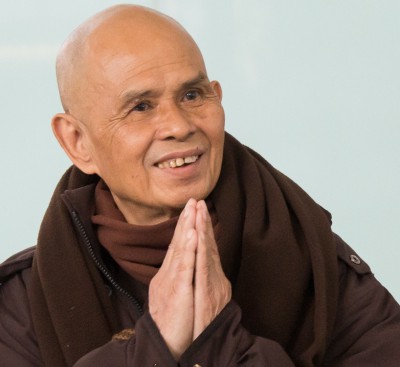 He is a Vietnamese monk who also lives in France not far from us. He influenced the work of Martin Luther King and campaigned in the USA against the Vietnam war. During the campaign the monk met an angry American who berated him for coming to the USA and told him he should “get back to Vietnam where the real problem was”. After a very deep breath and thought the monk said something like “to help a plant to grow you need to water the roots, not the leaves.”

I think we need to look for the “real roots” of these very big problems we have in the world. I think that some of the roots may be in the complex political and economic systems we have created and are desperately trying to protect. Within these complex systems, countries, governments, corporations and individuals compete for resources. There are sometimes unintended feedback loops in this competition for resources which can often make bad situations worse. So I think to start with we should try to feel LOVE for the friends and families of all the victims in all affected countries. If we can begin to feel that connection to them as individuals, just like us, rather than ‘others’ perhaps we can begin to change the systems which I believe are contributing to the problem.

You can find out more about this amazing monk here

This is not a post about the latest electronic teddy bear or the revelations of a long dead President brought back to life. It’s about “ideas worth spreading” which is a tag line of a very successful organisation which holds inspirational speaking events across the globe.
Each talk is limited to about 25 minutes but some are less than 10 minutes. The talks are on YouTube and some have had over a million views. 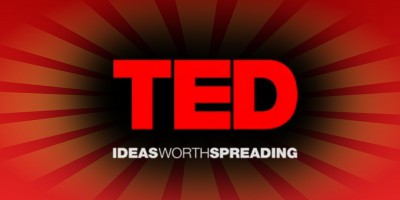 What I like about these TED talks is the diversity of the subject matter and the competence of most of the speakers. You can view a talk by a specialist on virtually any subject which would normally cost a lot of money to watch, absolutely free. I have now watched over 200 of these talks and have learned something from all of them. It’s an amazing free resource and even though a few talks have been “banned” you can even watch these with a bit more effort searching. Also, you can even apply to host your own event, which I would like to do one day.

When I think about all this information on new ways of doing things it gives me a sense of hope that the world is slowly changing for the better and that our existing systems of health, education, shelter and food production will change radically in my lifetime. There are some very different ideas out there which challenge the existing system. This can make us realise that we can connect with others in different ways and begin to follow our own path and discover and create our own alternative future which is different to what large governments and large corporations may have in mind. Its not my view that governments and corporations are evil it’s just that they are caught up in unsustainable systems which value GDP over people and the planet. The people involved in them are trying their best to keep these systems going, but that’s for another post.

So the TED talks have loads of information on all sorts of subjects which is really worth a look. In fact, it is a bit like a cuddly talking teddy bear or a good President brought back from the dead. Have a look.

I often find myself involved in discussions about the fact that most of the news we hear on television or read in the newspapers is bad. We know that people tend to buy more papers if the news is ‘sensational’ in some way.

It seems that there is a biological reason for this. The most basic parts of our brain respond very quickly to fear. We are ‘pre-programmed’ to respond to fear as this has been vital for our survival. The ‘flight or fight’ response has been very useful for escaping from wild animals but in modern times not many of us have to do this! The response can still be activated though by what we read and hear on a day to day basis. This can lead us to believe that the world is more scary and dangerous than it really is and over time can adversely affect our health.

We can help ourselves by choosing what we watch and read and how often we do this. Do we really need to watch the news several times a day? Here is an alternative news magazine called Positive News that has just been re-launched after 1,526 people bought community shares during a 30 day ‘Own the Media’ campaign.

The Positive News Magazine began life as a ‘free’ newspaper when it was founded in 1993 by an amazing lady called Shauna Crockett-Burrows. It helps to highlight some of the good things that are happening in the world and connects people and ideas. Here are a couple of links, one with information about Shauna Crockett-Burrows and the other to The Positive News website. The magazine is produced 4 times a year and would make a lovely present for yourself or someone else.

Communicating with others is always difficult when it involves language. I often wonder that if the human race had not developed language, where we would be as a species? Language is very useful but can also lead to so much misunderstanding. Although we live in France, my French is still very poor and I sometimes find it frustrating that I cannot understand others or make myself understood. However, there are some upsides to this. Not speaking the language very well has made me pay more attention to what people say, how they say it and made me observe their body language more. I can then pay more attention to what I say, how I say it and what I say with my body too.

Gestures, particularly hand movements are fascinating to watch and openness is often shown by how people sit or stand, and their facial expressions. Other situational things (sights, sounds, smells) and objects can also influence someone’s perception such as the positioning and colour of furniture in an unusually lit or shaped room. It’s useful to think about all those things when you meet someone. The most likely influence on communication is people’s previous experience of a similar situation.
We meet a new situation or person and believe we have met this before and we know how to deal with it. Without really listening, observing or treating this new situation with compassion, we interupt people and tell them what they “should do”. Alternatively, we ignore what they actually say and tell them about a very similar experience we had and what we did. Responding in this way we are trying to be genuinely helpful but usually failing to provide the support they usually seek. They often want us to simply listen compassionately to them and acknowledge their feelings at this moment. When they feel they have been understood they are often then prepared to face the choices which will move them on to their next stage of development. In a similar way, if we want to grow and help ourselves we can acknowledge our own feelings and make our own choices. What do you think?