Learn something new – its good for your brain! 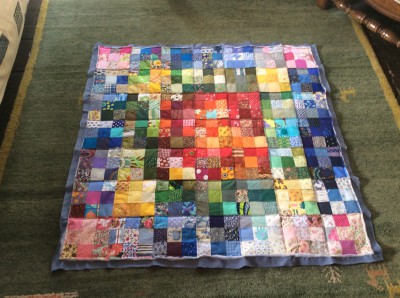 This is a picture of a mini-quilt I made last year. It was quite an accomplishment because sewing is not something I would count as a particular skill of mine! In fact I would go as far as to say that when I was younger I didn’t enjoy it at all and only had to look at a thread for it to end up in a knot! However, after a year of living in France I decided to join the quilting group in our village with the main purpose being to learn French. In the last four years I’ve made various items, met some lovely women and picked up some useful skills along the way. My French has improved also, though there is still a long way to go!

I’ve sometimes heard people say “You can’t teach an old dog new tricks!” when faced with idea of learning to do something new or different. The great news is that we are not dogs and its possible for us to continue to learn ‘new tricks’ all our lives. Our brains have what is known as ‘neuroplasticity’ which means they are able to physically change and adapt as we learn new things. The more we use certain pathways, the more that pathway develops and becomes stronger until there is a physical change in the brain.

Whatever your age or ability if there is something new that you would like to learn then begin now. Its good for your brain!

There are many videos on youtube explaining neuroplasticity if you want to find out more.