The Immigrant Robots are coming, what is our purpose then?

It’s a few months since I did a blog post for the onecourse. A lot has happened, BREXIT has started, President Trump is in the Whitehouse and Marie Le Pen ascends in France. My initial hopes of people flooding(like immigrants) to our onecourse did not materialise, my interest drifted a little and my attention was diverted by other shiny more tangible things, Robots! Whilst we are all busy worrying about or discussing BREXIT, Trump and Le Pen, and Immigrants we should really be focussed on Robots, because that really is going to be the next big thing. 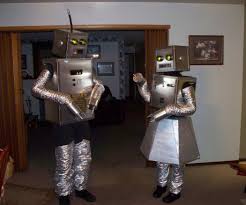 I trained as an engineer and I have always found the idea of machines and Robots fascinating. Imagine a future where humans live a life of leisure whilst the machines and Robots do the work! Robots can perform similar functions to humans and animals and once they have been created their limited needs can be met by providing them with one thing, energy. I can understand Luddites raging against the machine but I doubt the inevitable ‘progress’ of the machine will ever be halted whilst it is profitable. So here is my own prediction for the next 10 to 15 years of Robot and human interaction.

2017 Background. The earth, all humans and other species are undergoing tumultuous change. The economic and ecological systems are facing huge challenges and it is very unlikely that things will remain as they are. The current systems that we humans have developed are unsustainable and new systems are needed. Algorithms are now in charge of the worlds financial systems because it is too complex for humans to respond quickly enough to changes. Even the humble electric toaster is wifi enabled. The current economic system relies on perpetual growth on a finite planet using up valuable energy on transportation. Corporations, pension funds, and individuals chase better returns on financial capital, thus money is invested in activities which maximise profit. This speculation leads to high profits but at an enormous cost to the environment and significant human exploitation. Increasingly large volumes of technically complex consumer goods are manufactured with minimal wage related costs. Retail businesses employ fewer people as more shops move online. If wage costs of a company can be reduced close to zero, that company will become highly profitable and the home for an increasing amount of investment.

2022 The Immigrant Robots arrive. The costs of Robots is falling and once it reaches a point where acquisition and running costs are cheaper than human labour, Robots will replace humans. The first wave of Robots will be built by humans in low wage economies, but eventually, even these human workers will be replaced by Robots. Robots building Robots! These Robots will be comparatively low cost and sufficiently flexible to carry out the vast majority of the paid work currently done by humans. They will come in their hundreds of thousands or even millions to developed economies where wages are high and cheap human labour is in short supply. The location for the first wave of mega Robot factories are likely to be anywhere with abundant space, raw materials, energy, and political stability. An ideal place would have access to abundant solar energy and a means of energy storage. I am thinking of batteries but energy stored in any form would suffice.

2027 Robots breed like Rabbits. Low cost sites within developed urban population catchments will be ideal locations for the second wave of Immigrant Robots . They will come to build the factories and infrastructure, to farm, to build more robots, and to make the consumer goods. The day of the factory worker, driver, admin worker, salesperson and most other workers will be numbered. Imagine an economy trying to function within the existing system, with 60, 70 or 80% unemployment. Do we then want to increase the population simply to increase the number of consumers? The time is right to rethink our relationship with our planet earth and with each other. What do we really care about, what do we really love? Is it shiny, tangible consumer goods, Robots, or other people and our planet earth.

The above thoughts cause me to ask a question which you might have a go at answering in the comments below.

I believe this same question will be asked by many people in many countries over the next decade as the Immigrant Robots arrive. So perhaps the onecourse or something similar is needed after all.